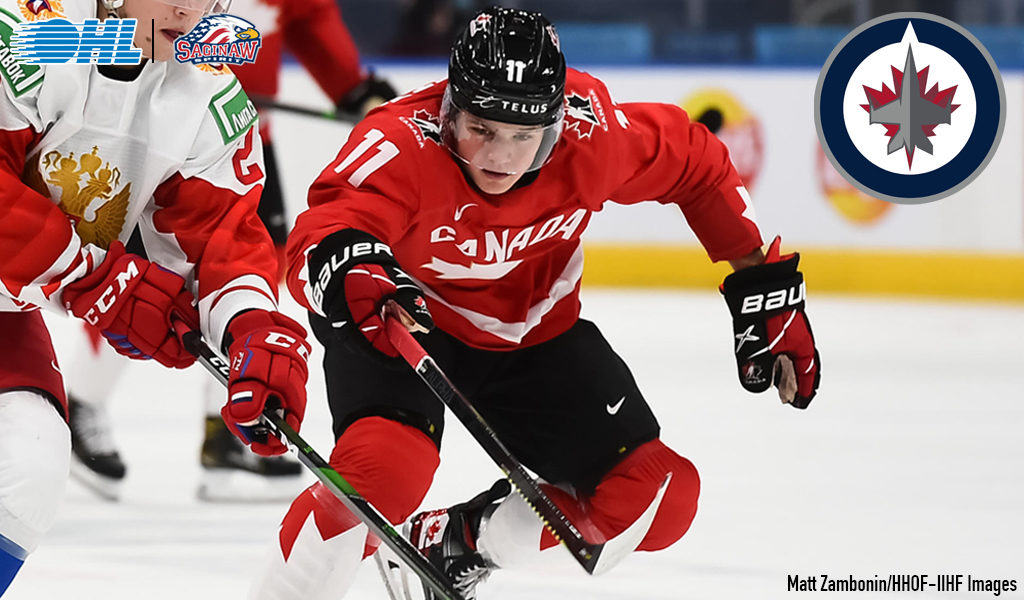 When Cole Perfetti touches NHL ice for the first time, he’s going to be ready to make an impression.

Fresh off his World Juniors stint with Team Canada where he earned a silver medal, all focus is now on earning his place with the Winnipeg Jets.

The 10th overall 2020 NHL Draft pick arrived in Winnipeg last Sunday and is in the midst of completing his week-long quarantine ahead of his first ever NHL skate.

A unique way to kickstart his NHL journey, no doubt – but by now, he’s used to facing the adversity that comes with COVID-10 protocols, and he’s not going to let it get in his way as he faces his childhood dream.

“It adds to the anticipation for sure, knowing they’re playing games and practicing and I could be out there but I’m stuck in a hotel room,” said Perfetti. “On the other hand, I have to be ready knowing these skates are happening and the games are starting. I have to be ready when I come out. There’s no time to waste and I can’t take a day off or anything.”

There’s a lot he’s been doing to prepare for this moment, both physically and mentally. Spending the last couple months with Hockey Canada has certainly been a big piece of that preparation.

“There isn’t much better hockey out there that can prepare you for the NHL. I think it’s the next fastest thing. Being there for the last couple months has definitely put me in a position to succeed here,” said Perfetti.

After an undefeated run to the gold medal game at the World Juniors in Edmonton, Canada fell 2-0 to Team USA to claim silver. While that second-place finish still stings, Perfetti’s thankful for the opportunity to represent his country on the international stage.

“Everything happens for a reason.”@NHLJets first rounder Cole Perfetti (@ColePerfetti91) used being cut from last year’s #WorldJuniors team as motivation to finish out a strong 111-point season with @SpiritHockey and earn his spot on @HC_WJC a year later ?? pic.twitter.com/VNLZsr850I

“We put a lot of time and effort in to be in the gold medal game and to be so close and come up short, it definitely sucks to lose that way to the Americans after having the tournament that we had,” he continued. “But it was just a great experience playing in that tournament. To play at that stage at the World Juniors, all eyes are on you and the whole country is watching. So it was definitely a huge honour to represent Canada on the world stage.”

Despite his team’s disappointing finish, Perfetti was happy with his individual performance and his ability to contribute in different situations. Over seven games, he recorded a pair of goals and four helpers for six points.

“I think I did a pretty good job contributing when I could and making the most of my opportunity. Obviously with so many good players top to bottom in that lineup, you’re not going to play all the roles that you’re used to getting in your club team. I was fortunate enough to get power play time, and I tried to go out there every time and make the most of it and give the team a chance to succeed.”

Following the tournament, Perfetti spent a few days with his family back home in Whitby for late Christmas and birthday celebrations. Having been away from home since mid-November, it was a much-needed reset.

Now, back in quarantine for the third time in less than two months, focus has shifted to being NHL-ready. While he awaits clearance for his first skate with the Jets early next week, he’s been killing time playing PS4, FaceTiming friends and family, and watching TV. Though he admits being stuck in a hotel room alone is unsurprisingly starting to get old, Perfetti has also admittedly welcomed the opportunity to try some new things on his own; things like cooking and cleaning.

The Spirit standout has been vocal in crediting the OHL with preparing him for the NHL jump. His on-ice accolades speak for themselves, having posted the second-highest OHL point total with 111 in his sophomore season. Now, sitting in his hotel room alone with his NHL dream days away from becoming a reality, it’s the off-ice preparation that sticks out more than ever; mainly the way he’s matured as a player and a person over his two years in Saginaw leading up this big moment.

“I’m fortunate enough to have had billets that do a lot for me and treat me like royalty. But at the end of the day you still mature a lot when you come to the league. There are a lot of responsibilities, whether it’s showing up on time, going to school on time, preparing food when your billets aren’t home and stuff like that,” said Perfetti. “You really mature and that’s something I’ve noticed over the past couple years. The kind of person I am now two and a half years later, the difference in the kind of person and the maturity level is through the roof.”

“I feel ready strictly because of how well the OHL mimics the NHL.”

With sights set on making an appearance in a game or two, Perfetti feels ready for the challenge but also knows how tough making that jump will be. Still, he’s determined to do whatever he can to keep up with the level of speed, physicality, and elite talent as a newly-turned 19-year-old.

“I’ve gotta be prepared. These are men who have been playing hockey for years and years and I’m a 19-year-old kid who still has to fill out and become a man, playing against these men who have wives and kids at home. It’s kind of crazy to believe and to think about,” he said. “This Jets roster is very deep, there’s a lot of talent up and down and it’s going to be very tough to crack, but I think when I get my opportunity I just have to make the most of it and do whatever I can to stick.”

The Winnipeg Jets kick off their unique, all-Canadian division season Jan. 14 against the visiting Calgary Flames. While Perfetti won’t be joining them just yet, he’ll be no stranger to his teammates when he finally steps foot on Bell MTS Place ice.

“When I got drafted I talked to couple guys. Morrissey, Wheeler, Copp, Scheifele – they all reached out. Since I got here, I’ve talked a lot to Copp – we have the same agent so there’s a little bit of a connection there. He’s been reaching out a lot, texting, making sure everything’s good, asking if there’s anything I need, welcoming me and making sure I’m all set,” he finished. “It’s great to see that support and know you’re welcomed, especially from guys that are part of the leadership group and the older veterans. I just can’t wait to meet them all and get on the ice with them.”