Feature: Owen Tippett wants to go out a winner with Spirit 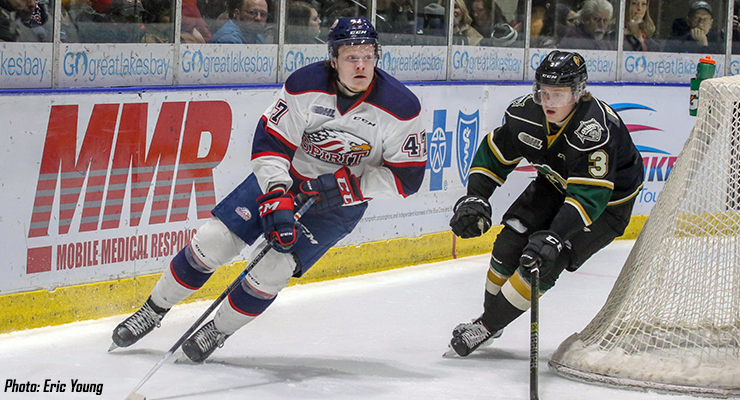 Acquiring Owen Tippett in a deal at the trade deadline was one of the biggest moments in the history of the Saginaw Spirit franchise.

In one move, the Saginaw Spirit added all four to a team already challenging for a division title, and gave a good team the opportunity to be great.

“He’s arguably the best player in the league,” Spirit coach Chris Lazary said. “So when he gets going, he can be dominant. It makes players around him better, and it helps the confidence of the group.”

The Peterborough, Ontario native was pegged for big things going back to minor midget hockey, which saw the Mississauga Steelheads pick him No. 4 overall in 2015.

His recap said, “He has a good scoring touch to go along with his speed and agility. He has explosive speed and if he gets a step on a defenseman, he’s tough to catch.”

More than a few OHL defensemen have found that to be true over the years.

Tippett scored 15 goals as a rookie before exploding in his sophomore campaign with 44 goals and 75 points, which culminated in the being selected by the Florida Panthers with the No. 10 overall pick in the 2017 NHL Entry Draft.

Florida Panthers General Manager Dale Tallon said of the 6-foot-2, 204-pounder, “Owen is a natural goal scorer with a bright future and he already possesses NHL-ready size and speed. We’re looking forward to watching him compete for a spot on our NHL roster at training camp this fall.”

Tippett made the Panthers’ opening-day roster and saw National Hockey League action highlighted by his first professional goal against Anaheim.

Now he’s playing for Saginaw, where his cousin Mitchell Stephens used to wear the captain’s “C”.

A career point a game a producer, Tippett had 114 OHL goals under his belt when he decided to waive his no-trade clause at the deadline and join Mississauga teammate, and Edmonton Oilers prospect, Ryan McLeod in a move to the Spirit.

“It was something I couldn’t turn down,” Tippett said. “Being my last year, I want to win. I saw the success they were having here, and it was pretty much a no brainer.”

A no-brainer, but one with an inauspicious start.

Tippett was in the midst of yet another impressive campaign with the Steelheads scoring 19 goals with 14 assists in 23 games for Mississauga before being tapped for Team Canada in the World Junior Hockey Championships where he had two goals and four points in five games.

After spending weeks on the road playing for Canada, Tippett had just enough time to return to Mississauga, pack up his belongings and head out of town, arriving in Saginaw shortly before his debut against Kitchener.

To be blunt, the 20-year old was exhausted, and it affected his early games in Saginaw.

A player accustomed to finding the back of the net was finding iron instead, but the team never lost faith in him and it’s beginning to pay off.

“He’s finding life,” Lazary said. “He’s got his legs back. We always call it the goalie bump. When a player is struggling, we bring him out to the goalie session and let him be the shooter. It always seems to work. He’s found his groove.”

In a conference clash against league-leading London, Tippett had an unofficial breakout party scoring two goals in an impressive 6-3 win over the Knights. Then he followed that with a hat trick against Flint before scoring in a third-straight game against Owen Sound.

He then dropped three points on North Bay and four against defending OHL champion Hamilton.

“It was a whirlwind, but it’s hockey and things happen for a reason,” Tippett said. “It feels good, but individual success comes from team success. That London game was huge. They beat us when we went to their rink earlier in the year. For them to come here and us beat them is a confidence booster.”

Another confidence booster comes in the playoff experience Tippett brings to Saginaw.

The Spirit want to make a playoff run, and Tippett has been a part of one scoring 10 goals with nine assists in 2017 when the Steelheads made it all the way to the OHL finals.

“We’re a really deep team with a lot of skill,” he said. “Teams I’ve been on in the past have been the same. Obviously, this is one of the faster and most-skilled teams in the league.”