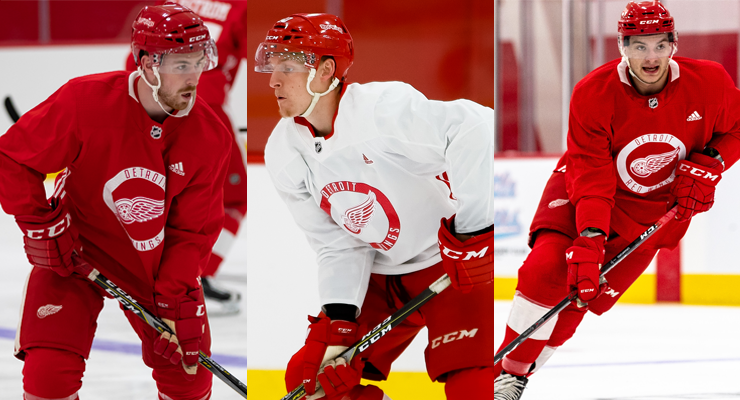 Saginaw, Michigan – On Wednesday, the Detroit Red Wings announced their roster that will participate in the 2018 NHL Prospect Tournament held at Centre Ice Arena in Traverse City, Mich from Sept. 7 – Sept. 11. Among those prospects participating in the camp are three players with Saginaw Spirit ties.

Gilmour, 19, is coming off of an injury-shortened season in which he appeared in 41 games, scoring nine goals and 16 assists. Gilmour is only five points away from reaching 100 points in his OHL career. The former first round pick of the Spirit was selected in the seventh round, 193rd overall by Detroit in the 2017 NHL Draft.

Webb, 19, will play in his first full season with the Spirit in 2018-19. He was acquired from the Hamilton Bulldogs at the trade deadline and appeared in 30 games with the Spirit last season. Webb amassed a career-high in points, while playing mostly a shut-down role alongside Captain Keaton Middleton. The 6-foot-3, 200 pound defenseman was taken by the Red Wings in the sixth round, 164th overall in the 2017 NHL Draft.

Crawford, 21, enjoyed a career-year as an overager last season. Crawford put an exclamation point on his Spirit tenure by becoming the second highest scoring defenseman in team history (149 points), only behind Patrick McNeill (182 points, 2003-07) and second all-time in assists (126), again only trailing Patrick McNeill (129). The Ajax, Ontario native signed a two-year pro contact with the Grand Rapids Griffins, AHL affiliate of the Detroit Red Wings, this past April.

Tickets are available for $10 per day and can be purchased at Centre Ice Arena or at www.centreice.org. Each ticket is good for all four games per day. Teams are divided into two divisions and will play each team within their division once during the round robin before a crossover on the final day of the tournament, with the first-place finishers in each division meeting for the championship on Tuesday, Sept. 11. For more information and a complete tournament schedule, visit www.centreice.org.

Reserve your seat at The Dow Event Center by calling (989) 497-7747 or visit www.saginawspirit.com for more information. YOUR Region. YOUR team. YOU’RE invited.

Director of Broadcasting and Communications