Craig Goslin named Chairman of the OHL Board of Governors 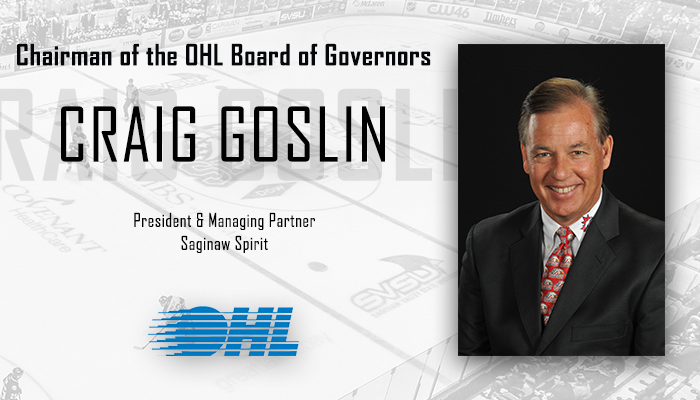 SAGINAW, MI – The Saginaw Spirit, members of the Ontario Hockey League, are proud to announce the appointment of President & Managing Partner Craig Goslin as Chairman of the OHL Board of Governors.

“The Ontario Hockey League is the best development league in the world,” said Goslin. “Our league is committed to the development of the fine young men on OHL rosters into future university graduates, tradesman , future stars of the National Hockey League and good people. It is an honor to serve the Owners in our league as their board chair. The Owners and Governors are all committed to the same cause of betterment for our student athletes, our home town communities, and the in-seat fan experience.  The league office, led by Commissioner Branch, has a very talented staff that continuously explores ways to make the OHL experience as good as it can be for the elite student athletes that make up the rosters of our 20 teams.  I’m honored to work closely with them all.”

A former two-time OHL Executive of the Year in 2006 and 2007, Goslin has been a part of the Spirit franchise since its inception in 2002 and has been instrumental to the success and evolution of the club off the ice. He previously served on the Executive Council in the role of Vice-Chairman and is also a former Chairman of the OHL’s Business Development Committee. Goslin has been a member of the OHL Executive Council since 2011.

“Craig has served on the OHL Executive Council for eight years now and has demonstrated tremendous leadership qualities throughout that time,” said Commissioner David Branch. “The key to being an Executive Council member is putting the league initiatives first and Craig has clearly demonstrated that from the outset of his time on the council. He has the respect of all his peers and he’ll undoubtedly prove to be an excellent leader and contributor for the benefit of the league as a whole in his role as Chairman of the Board.”