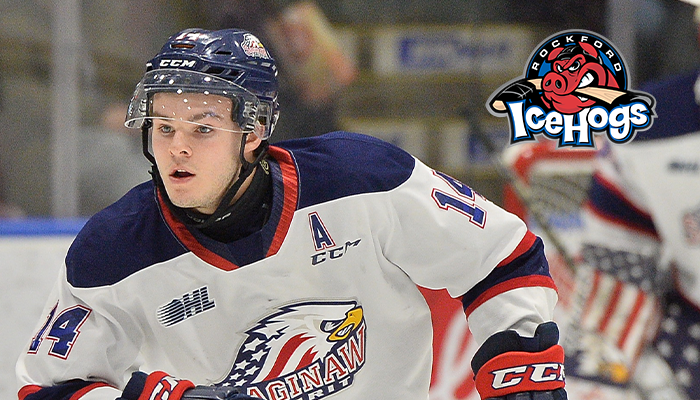 “As an organization we could not be happier for DJ and the Busdeker family,” said Saginaw Spirit General Manager Dave Drinkill.

“DJ is a player that has worked extremely hard for everything he has gotten and no one deserves this contract and opportunity more than him. Since day one in Saginaw, he has been a complete professional and gave everything he had to the Spirit franchise. We can’t wait to follow DJ in his pro hockey career, and wish him nothing but continued success.”

The 20-year-old native of Dexter, Michigan is coming off of his most successful junior season accumulating 57 points in 62 games and finished with the second most shorthanded goals in the OHL (7), while playing on both sides of the puck for the back-to-back West Division Champions.

Busdeker had extremely impressive month of February, where he scored eight goals and 12 assists for 20 points in 11 games. Five of those points came on a career evening, when he scored four goals and an assist in an 8-2 victory over Hamilton on February 29.

“There is no greater satisfaction in coaching than having the opportunity to watch a player mature through his junior career,” said Spirit Head Coach Chris Lazary.

“Entering our league as an undrafted free agent and leaving our league with an AHL contract is a special accomplishment for DJ, his family, and our entire organization.”

“DJ resembles everything we want the Saginaw Spirit organization to be about – hard work, high character, and relentless pursuit of getting better every day,” Lazary continued.

“DJ has earned everything that he has been given am I am excited to watch him progress at the professional level. As his head coach, I will never be able to thank him enough for his contributions to our program, both on and off of the ice.”

Busdeker went undrafted into the Ontario Hockey League and was signed by the Spirit as a free agent in November of 2016 after a brief tenure with the Topeka RoadRunners in the North American Hockey League (NAHL).

Prior to the start of the 2018-19 season, Busdeker was named to the Spirit’s leadership group, where he served as an alternate captain for the last two seasons.

“My time in Saginaw has been amazing,” said Busdeker. “Being a Michigan kid and being able to play juniors in my home state has meant the world to me. I can’t thank my teammates, coaching staff, management, and owners enough for providing me the opportunity to succeed in Saginaw. Not only have I grown as a player, but I’ve grown even more as a person. I will take the many lessons I have learned in Saginaw on with me forever.”

At the conclusion of the 2019-20 season, Busdeker was voted the second-best penalty killer in the Western Conference in the Ontario Hockey League Coaches’ Polls.