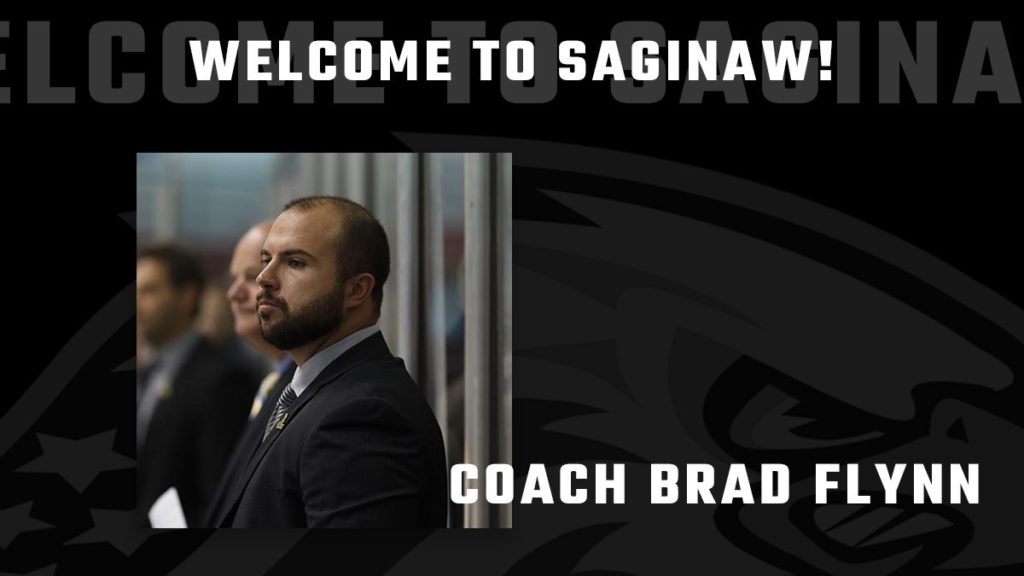 “We are thrilled to welcome Brad Flynn to the Saginaw Spirit family,” said Drinkill. “Upon speaking with Brad, we feel his coaching philosophies line up extremely well with our staff. We are excited to get him to Saginaw and get started on next season.”

Brad and his father, Danny, are the first ever father and son to coach in all three leagues of the Canadian Hockey League.

Danny Flynn is one of the most successful coaches in all of Canadian Major Junior history. He is a Memorial Cup Champion, a two-time OHL Champion, a three-time QMJHL Champion, and was the recipient of the Ron Lapointe Trophy twice for QMJHL Coach of the Year. He is currently an Amateur Scout for the Columbus Blue Jackets.

Flynn enjoyed a playing career that included three years of USports hockey while attending Brock University and one season with the Huntsville Havoc of the Southern Professional Hockey League. With coaching in his blood, Flynn retired from playing at age 29 to follow his dream of teaching the game.

“I am elated to join the Saginaw Spirit,” said the incoming associate coach. “I am looking forward to working with Dave (Drinkill), Chris (Lazary), Jesse (Messier), and our players to build on the previous successes of the organization. I’m excited to move to Saginaw and become a part of their wonderful hockey community.”

In the scouting department, Drinkill has promoted South-Central Triple A Hockey League (SCTA) scout Greg Hammell to Head scout of Ontario. The 2021-22 season will be his fifth year with the franchise.

To fill Hammell’s previous role as SCTA scout, Drinkill has tabbed Jordan Selinger. Selinger is currently the Director of Hockey Operations for the Collingwood Blues Jr. A and has previously spent time as General Manager of the Oakville Blades Jr. A.

“Along with the addition of Brad Flynn, we are excited to announce the return of Brian Prout as assistant general manager and head U.S. scout, and Jesse Messier as assistant coach. Both have done a great job for the hockey operations and coaching staff, respectively. Greg Hammell has earned the promotion to head scout of Ontario after four seasons scouting the SCTA. We are proud to welcome Jordan Selinger to our scouting staff to fill Greg’s previous role. All in all, these moves solidify what we believe to be an exceptional hockey operations staff heading into this 2021-22 season.”

The hiring of Brad Flynn is dependent on the approval of immigration paperwork.