Blade Jenkins relishes in expectations of being Spirit first round pick 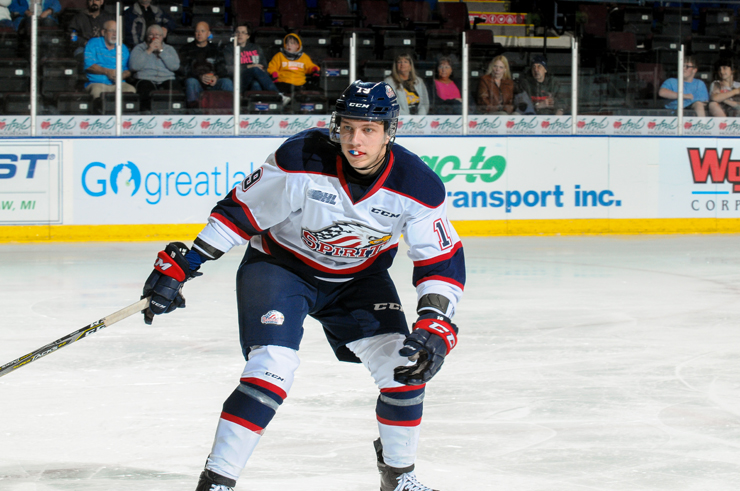 SAGINAW, MI — Blade Jenkins was well aware of the expectations heaped on him as a former high first round draft choice and veteran of the United States junior national team.

But the pressure has officially lifted.

After a slow start to the season, the 17-year old Michigan native is finally producing all over the ice, especially on the scorer’s sheet, for the Saginaw Spirit.

“For me, I just wanted him to get better every day,” Spirit coach Troy Smith said. “And I think he’s done that. He’s scored the last two games.

“It’s no different than the rest of our team. As long as he continues to get better, that’s my only expectation.”

A native of Jackson, Mich., Jenkins was seen as a cornerstone, leader and future professional star when he was selected by Saginaw with the fourth overall in the 2016 Ontario Hockey League Priority Selection.

Saginaw made the selection knowing from the get-go that Jenkins wouldn’t be reporting as a rookie because of his commitment to the junior national team, but his upside was too good to pass on.

“Blade is the best player in the draft, and that’s the consensus of the hockey world,” Spirit General Manager Dave Drinkill told MLive after the draft in 2016. “He’s got elite skills, but he’s also the player who wants to be on the ice at all times. He will do anything to play.”

Now a 6-foot-1, 195-pound center, Jenkins has been at the heart of another Spirit youth movement centering a line with second-year forwards Damien Giroux and lifelong friend DJ Busdeker.

“I’ve never really played with (Giroux) before (this season),” Jenkins said. “We played really well together at the beginning of the season; we just weren’t producing. Then these last five or six games, we’ve really been playing hard and doing the simple things. That goes a long way.”

Jenkins in particular was showing flashes, early in the season, of the elite skill that inspired Saginaw to draft him. At times, he was dynamite on face offs, and on several occasions he weaved his way through the opposition’s blue line creating scoring opportunities for himself or setting up a teammate with a Grade A opportunity.

But shots that hit iron or are pushed just wide don’t show up on the scoresheet or help Saginaw climb the standings.

In his 10th OHL game, Jenkins finally found the back of the net tallying his first career goal against the Peterborough Petes. And that started a stretch that has seen him record a point in 4 of 5 games.

“You feel those expectations (of being a high pick) coming into (the season),” Jenkins said. “It definitely wasn’t the start to the season that I wanted, but when you have the right guys and a great locker room and great staff around you, it really helps you go forward.

“You definitely get a little more comfortable once you get that first (goal) and you settle in. You feel like you have a little bit more time and space with the puck.”

Jenkins has scored a goal in back-to-back games for the Spirit, highlighted by a two-point performance in Saginaw’s come-from-behind win against rival Flint. His line accounted for three goals with four assists and a combined plus-9 rating in the 5-3 win.

“Anybody in this league grew up scoring,” Smith said. “It’s important for their confidence; it’s important for our team. We need contributions every night, and, tonight, they really carried the load for us.”