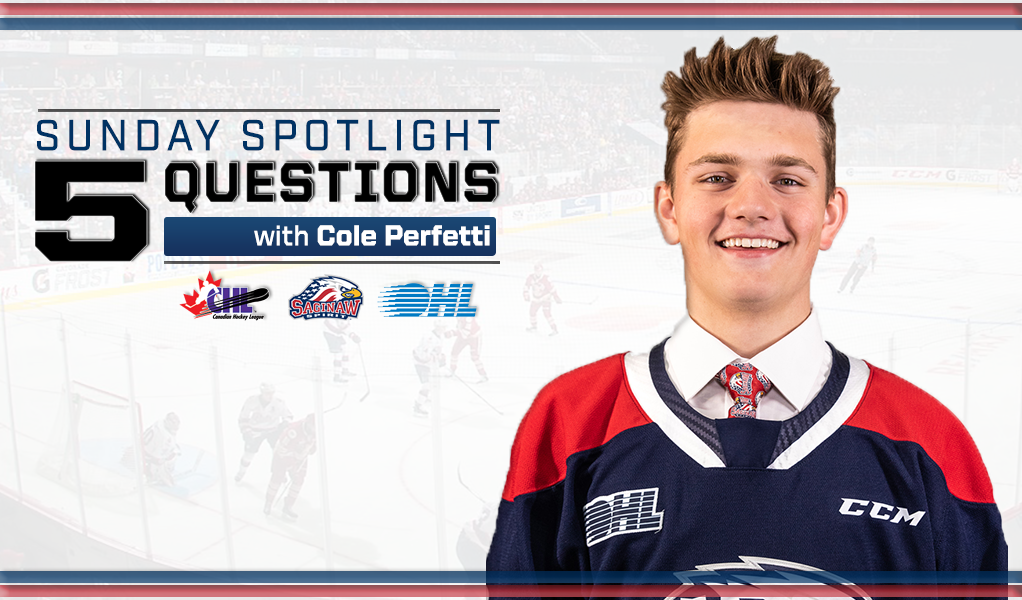 Cole Perfetti is all in on a busy year ahead.

A projected early selection in the coming 2020 NHL Draft, the Saginaw Spirit forward drew the attention of talent evaluators in 2018-19 when as a freshman he led all Ontario Hockey League first-years in goals and points. At year end, he then shined under the national spotlight as part of Team Canada at the 2019 Hlinka Gretzky Cup, an opportunity that allowed him to put his shootout skills on display.

Perfetti’s success has carried over to this season where through 16 games he has put up a team-leading 27 points counting five goals and 22 assists. The budding sophomore chatted with the CHL about his on-ice success as well as his plans for this season:

What is it about your game that allows you to be so effective with the puck?

I think my IQ and my vision are my strong suits. I feel like I can make plays at a high level and find the right guy. I think I can make a lot of plays in the offensive zone, find the right guy, and put him in good scoring chances. I think my shot is pretty good when I get a chance. My release is pretty quick and accurate I think. Being able to score and set up my teammates, I think it helps offensively.

What did you take away from last year’s playoff run?

Some of what we learned last year is just how hard it is. The team we had was so skilled, so talented, and we still couldn’t get the job done. We were one game away, Game 7 in the Conference Finals. It just goes to show you how good you have to be day in and day out and how hard you have to work. We had a great team with a lot of camaraderie and everyone got along, but at the end of the day we just couldn’t get the job done. It goes to show you how hardworking and skilled you have to be to win in this league, and we’re definitely preparing for that this year.

What was it like overseas at the Hlinka Gretzky Cup?

It was a great experience going overseas. Obviously we would have liked to get that gold medal but we ran into a great Russian team, and kudos to them, they played a hell of a tournament. It was awesome coming together as a team and playing with all the best kids in the country and being able to play with guys like Quinton (Byfield) and (Hendrix) Lapierre, and guys from all across the country. It was an honour. Being able to make a name for myself, score some goals and put up some points and make some plays, it was nice to do that for the scouts and prove that I should be at the top of the list. I think I made a good name for myself and I was really happy with it.

What is your level of excitement ahead of the 2020 NHL Draft?

It’s going to be a long year. It’s going to be a lot of fun. I’m looking forward to it. It’s just the start of it. I’ve worked so hard my entire life just for this year and I’m not going to take it for granted. I’m going to cherish it and soak it all in and be grateful this year. I just want to have fun and enjoy the year with my teammates. We’ll see when the day comes when the draft is, I’m just hoping I can hear my name called. It’s a start of a long journey from there and I’m really excited to get it going.

Is there an NHL player you model your game after?

I think somewhat Mitch Marner. I may not have the exact speed – he has electrifying speed – but I feel like his hockey IQ is his best attribute and I feel like my best attribute is my hockey IQ. He’s able to find guys in the right spot and then he has that scoring touch, so I feel like I have that a little bit too. I don’t feel I play exactly like anyone in the NHL but he’s definitely someone I look up to.

The 5 Questions series appears every Sunday.