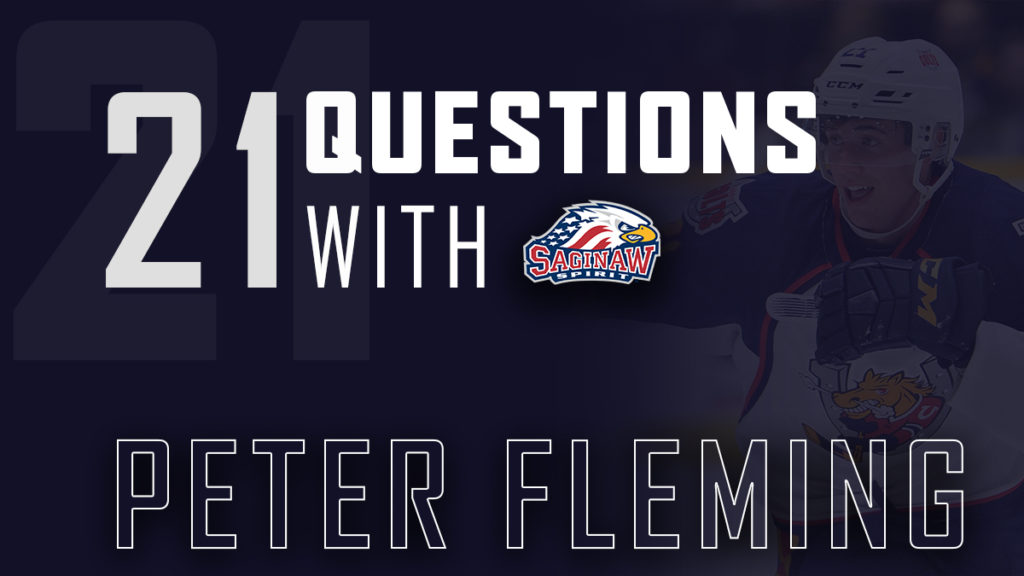 Peter Fleming was acquired by the Spirit along with Ryan Suzuki and Ryan Beck in a January 2020 trade with the Barrie Colts. The forward played for the Toronto Patriots of the OJHL during the 2019-2020 season where he tallied 19 goals and 26 assists in 40 games played. During the 2017-2018 season he was named the GOJHL Academic Player of the Year, as well as the Rookie of the Year. Below are 21 questions with Peter for Spirit fans to get to know a little more about him.
Name: Peter Fleming
1) Do you have a Nickname(s)? – Flemmer

2) Where were you born? – London, Ontario

4) Do you have any pets (kind/name)? – Dog – cross between a pug and beagle named Lenny

5) What’s your most memorable hockey moment? – Tournaments with the boys

6) Who is your favorite NHL Player and why? – Evgeni Malkin – completely psycho but still good

7) Why did you choose the Number you did? – Was my number all the way through minor hockey

9) What’s your favorite sport other than hockey? – Golf

10) What are some of your hobbies? – hockey, golf, video games

16) Do you speak any other languages? – 5% of the French language

18) Who has been the most influential person in your life? – My Dad

19) If you could hang out with one celebrity (dead or alive) who would it be? – Kevin Kisner because he seems like a cool guy

20) If you could travel anywhere in the world, where would you go and why? – Bora Bora to experience it before it ends up underwater

21) If you were stuck on a deserted island, what three (3) things would you bring with you? – drinking water, flare gun and books